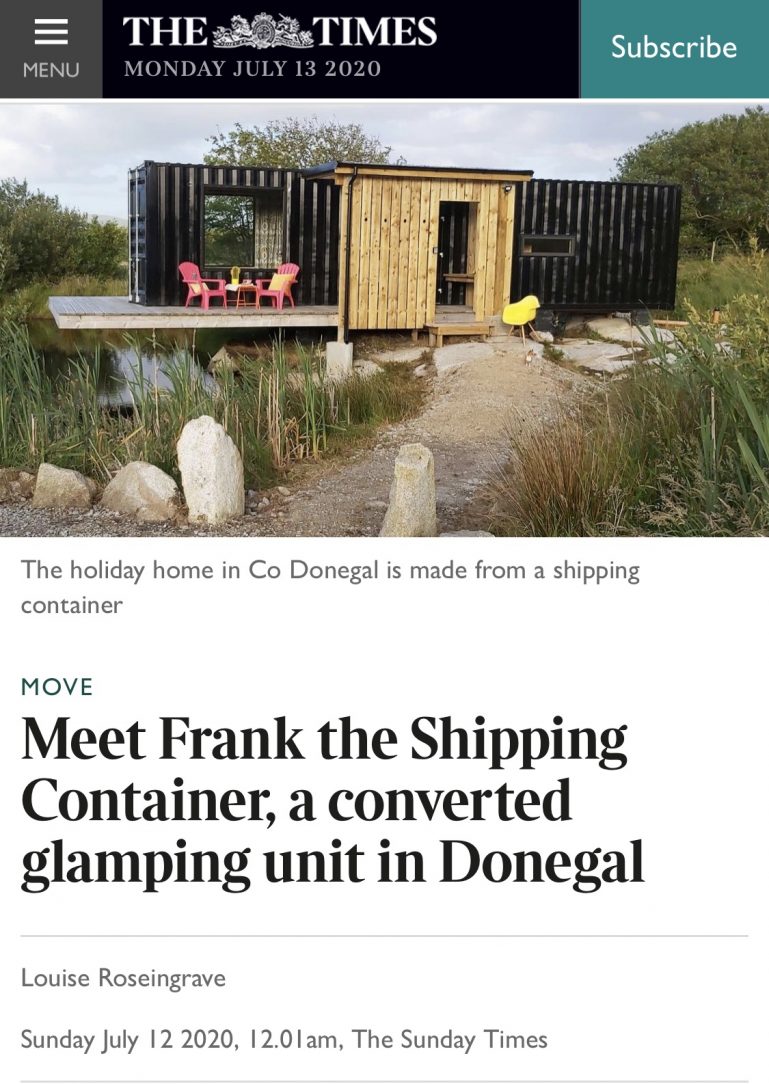 Frank the Shipping Container in the Times Newspaper

Delighted by the positive coverage in today’s Sunday Times (Irish edition) for Frank the Shipping Container.

A house that bounces is an unusual boast, but it’s just one of the welcome quirks of “Frank the Shipping Container”. Designer Greg Stevenson bought the 12 metre-long container for less than €4,000, in 2016, and has turned it into a comfortable and attractive holiday home. The container’s cantilevered design allows a third of the structure to float on concrete stilts above a private lake, with its resident heron, on the remote west coast of Co Donegal. The rest of the container is secured on a ground foundation.

The stylish bolthole is named after the early 20th-century architect Frank Lloyd Wright, who was interested in the cantilever process and is one of Stevenson’s heroes.

“My interest was in the engineering of it, the cantilevering process. Standing on the deck, you can cause the whole building to bounce. So it’s a bouncing building and I am really pleased with that,” he says.

Stevenson is an architectural historian, who specialises in creating innovative getaways for the holiday-rental market. He founded Under the Thatch, a company that offers quaint and quirky holiday homes — think Cameron Diaz’s romantic country cottage home-swap in the film The Holiday.

Before its conversion, Frank was transporting machinery parts from China to Omagh, Co Tyrone. The container, which was a little smaller than a studio flat, was delivered to a one-acre site near Stevenson’s home at Traighenna Bay, on the rugged coastline between Glenties and Gweedore.

For the first few years, he used it as a tool shed, but then came up with the idea of converting it. “I was playing, experimenting, and that was my pleasure in the project. I was googling the basics, moving it with a JCB and seeing how far we could push it,” he says.

“I wanted to build a house from a shipping container to see how it went. I’d built houses out of earth, timber, tin, blocks — pretty much everything that is possible. I wanted to see how far I could cantilever the building before it fell in the lake, so that was great fun.”

Frank forms part of a glamping-style development, each set in a large space, that allows Stevenson to indulge his passion for unconventional architecture. He has built up a good relationship with Donegal planners, who, he says, get “a really hard press”.

Frank was given the green light as a holiday rental, but securing permission for a container to become a full-time residential unit is unlikely, according to Stevenson. “People think they can buy a piece of land and put a shipping container on it and move in, and it’s going to be really cheap,” he says.

“It’s not really cheap — you can build something a lot cheaper — but also you wouldn’t get permission. The only reason we got permission is because it’s a glamping unit, a commercial structure. I don’t know of any council in Ireland that would allow you to build one as a residential unit. They would be concerned that it was not large enough for full-time residential use or for a family unit.” he says.

The reconstruction cost €35,000. At just under 30 sq m in size, the container includes an open-plan living space and kitchen, a shower room and bedroom, plus a deck surrounding the property. As it is a high-cube container, it is, at 2.9 metres tall, higher than a standard one, which is 2.4 metres tall. Stevenson says the extra height makes a big difference to the interior space.

The project began with a search for high-quality double-glazed windows. Stevenson found some that were classed as seconds, and bought them at a fraction of the normal price.

“We managed to find a set of windows that were brand new and quite high spec, but still affordable. So we designed the openings around the windows,” he says. Cutting openings for the windows and doors, together with other welding work, cost €10,000. The open-plan kitchen and living area.

The open-plan kitchen and living area Frank’s steel exterior was spray-painted black. The inside was dry-lined, and shuttering plywood was used for the interior cladding.

This process, he says, caused many a headache for staff at his local builder’s merchant, as he carefully selected each bundle of ply for its aesthetic effect, choosing “the prettiest grains to create a natural yet dramatic and beautiful finish”.

The kitchen came from Ikea. Stevenson is a fan of the Swedish brand and has cultivated a detailed knowledge of its products, which allowed him to build a stylish kitchen at an affordable price.

It comprises a plastic laminate worktop (€130), which Stevenson says is “what you need in a holiday rental”, and off-cuts were used to make kitchen shelves and a breakfast table. The sink, tap, fridge-freezer, cooker and hob were sourced individually and the finished kitchen cost €1,500.

“There’s nothing expensive about it. Something crazy has happened to kitchens in the past 20 years, with people expecting or even wanting to spend huge amounts on them,” he says. “Now it’s happening to bathrooms. “There’s no need. Sure, if it’s your dream home, do what you like, but in my opinion most people spend too much on their kitchen.”

Stevenson installed an enclosed bedroom, with a double bed, and a bathroom with a double shower and heated towel rail. Frank is equipped with a 32in television for guests to relax in front of should they tire of the beautiful views. The heating, hot water and shower are electric.

“The reason Frank is of interest to me and is successful is because the cantilever is provided from the structure. It’s got a really good, reinforced-steel structure, and that’s allowed me to create the cantilever,” he says. “But if Frank was not cantilevered, it would have been much cheaper to build it out of timber frame and clad it with steel or wood. “Sealing containers is a nightmare and, with the cost of welding alone, they are not easy and cheap to convert.”

Elsewhere on Stevenson’s property, guests will find a shepherd’s hut, sitting on the edge of a lake on an acre of land, and a traditional thatched cottage, which has been renovated and extended to the rear. All three rentals are pet friendly. Stevenson has plans for numerous unconventional projects but, for now, is happy to report that the newly completed container is already earning its keep, and is fully booked until mid-September.